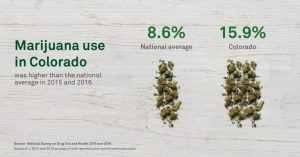 The Rocky Mountain High Intensity Drug Trafficking Area released a report detailing the impact of legalized marijuana in Colorado. The report showed that 15.9% of people were self-reported past-month marijuana users compared to the national average of 8.6%. Increased drug use has impacted traffic accidents and public health in the state. A few other statistics include:

While it may not come as a surprise that people are using marijuana more frequently where recreational use is permitted, the parallels between increased drug use and increased dangerous activities are surprising. In a 2017 Westword poll, 48% of people who used marijuana recreationally reported going to work high and 39% said they went to work high on a weekly basis.

It is important to keep your employees and workplaces safe regardless of state marijuana legislation. Drug testing for marijuana can help to reduce injuries in the workplace, improve productivity, and reduce employee turnover.

For an interactive map with marijuana positivity by zip code, visit DTIDrugMap.com.